The ebooks@cambridge team have collated the ebook collection usage statistics for the calendar year 2017. Last year over 56,000 academic ebook titles were consulted across nearly 60 platforms. Cambridge librarians can download the whole dataset from the Usage statistics section of the ebooks@cambridge intranet site, but a brief summary of the findings is also presented in this post.

Lets have a look at how these hits were distributed:

Ebook usage spiked in 2017, there was over a 22% rise on 2016 figures, after a couple of years of levelling out. The graph below illustrates the growth in our ebook collection usage since 2012, during this 6 year period there has been a rise of over 284%: 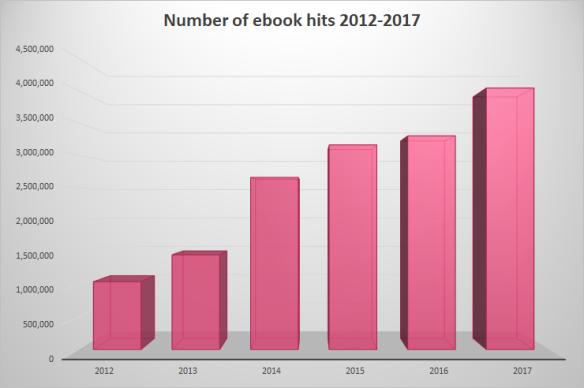 October was once again the standout month where our ebooks were working the hardest (over 617,000 hits), followed closely by November. September was the sleepiest month for our ebook collections but they still attracted over 138,000 hits:

Our most popular ebook platforms are well used generally because there are large numbers of ebook titles hosted on them (including titles which appear on sometimes multiple reading lists), covering a wide range of subjects.

The 5 ebook platforms with the highest usage were:

*MyiLibrary is now no more, as of April 2018 all owned titles migrated to Ebook Central.
**These figures exclude Cambridge Companions, Histories, and Shakespeare Survey titles.

Some of the ebooks platforms which have seen the highest increase in usage don’t necessarily host large numbers of ebook titles or receive many thousands of hits; for example Manchester Medieval Sources Online (MMSO) is included but only offers a very small focused collection of well respected titles. The number of hits on MMSO in 2017 was 549, so relatively few, but this was a very substantial increase in hits from the 2016 usage figures, hence MMSO’s inclusion in the list below.

The 5 ebook platforms/collections with the highest rises in usage were:

Some of our ebook platforms host only one or two titles, or the ebooks are of very niche interest, for example the Italian-language platform Torrossa, Kotobarabia which hosts Arabic content, or Nomos where only one title has so far been purchased. Just because these ebook platforms receive fewer hits does not mean that the titles hosted on them are less valuable; bearing this in mind the five platforms with lowest usage were:

There are a wide variety of reasons for falls in usage, course and reading list changes, maybe a previously well used title is replaced by another, and sometimes publishers change how they count usage statistics. Here are the five platforms which saw the greatest usage declines:

And finally, the top 20 ebooks for 2017 embrace a wide range of subjects…

*Considered an individual title by the publisher, but is actually more like an electronic resource, giving access to various titles. We have included it though as the number of hits it received seems to stand alone and is not the sum of the hits for the titles which appear on OSAIL.

Download the complete spreadsheet of usage statistics for 2017 from the Usage statistics section of the ebooks@cambridge intranet site, or contact ebooks@lib.cam.ac.uk.

We have recently completed the epic exercise of compiling 2016 usage statistics for over 75,000 ebooks on more than sixty platforms. Cambridge librarians can download the full dataset from the Usage statistics section of the ebooks@cambridge intranet site, but for those of you looking to get a quick idea, here are some key observations …

3.3 million hits were recorded on ebooks…

Let’s have a look at how these hits were distributed:

As you can see from the graph below, the steep growth in ebooks usage that we saw between 2013 and 2015 has slowed down and looks as though it is starting to plateau. Neverthless, there was still an increase in usage of 4.43% from 2015.

No surprises, October was the busiest month for ebooks usage…

…followed closely by November, while at the other end of the spectrum July then June were the quietest:

Let’s take a closer look at the platforms

The five ebook platforms with the biggest usage in 2016 were:

The fastest growers from 2015 (excluding newly acquired platforms) were:

At the other end, the five platforms with lowest usage were:

And the five platforms with the greatest falls in usage?

*It should be noted that Elsevier have changed the way they count the usage for their eLibrary platform, from counting page views to chapter views, hence why the medical etextbooks statistics have dipped dramatically.

*Considered an individual title by the publisher, but is actually more like an electronic resource, giving access to various titles. We have included it though as the number of hits it received seems to stand alone and is not the sum of the hits for the titles which appear on OSAIL.

Download the complete spreadsheet of usage statistics for 2016 from the Usage statistics section of the ebooks@cambridge intranet site, or contact ebooks@lib.cam.ac.uk.

The ebooks team have been studying your use of our owned ebook collections during 2014 and can announce that with over 2.5 million hits, usage across the collections is up by over 81.5% since 2013.

The graph below shows how ebook use peaks and troughs throughout each calendar year since 2012. The vertical axis shows the number of “hits” received.

The 10 most popular titles with University of Cambridge registered users, starting with number 1 at the top, are shown below. A wide range of subjects are represented; Biology,
Business, Classics, Economics, Education, Medicine, Music, and Psychology.

A large proportion of University of Cambridge academic ebook collections are searchable in LibrarySearch, and they are available for you to access both on and off campus (with a valid Raven login).

New ebooks are being added to the collections very regularly, and a selection of these are highlighted and accessible on our Pinterest boards.

For more information on the academic ebooks available to help your studies  please see the ebooks@cambridge webpage. You can also contact the ebooks team on ebooks@lib.cam.ac.uk if you have any questions, or your Faculty/Departmental librarians if you want to recommend an ebook title.

All about driving from Boston to Niagara Falls, Canada and back

about more than the Music Collections at CB3

A library for librarians

The news blog for the University of Cambridge, Department of Chemistry Library

Life as a Librarian and all the thrills along the way!

ejournals & eresources : news, advice and updates on new content from the ejournals@cambridge team for the University of Cambridge